Window of opportunity in London for Middle East investors 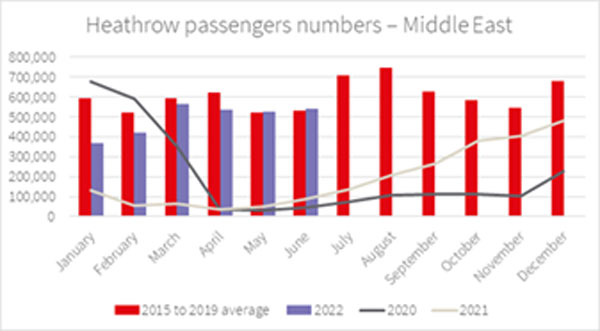 Passengers passing through Heathrow
The weaker sterling has created a window of opportunity for Middle East investors in London as there are signs of their return to the Capital, reports Property consultancy JLL.
JLL has reported on data comparing London prices now to 2014 highlighting that sterling buyers are paying 35% more now for London properties than they were in 2014, meanwhile, those purchasing in US dollars are paying 3.8% less.
For context, in June 2014 a £1 million London home would have cost $1.7 million, a weaker Sterling means at the end of June 2022 a £1 million property in London would cost $1.2 million.
Exchange rate forecasts from Oxford Economics show that the £ is predicted to strengthen against the US$ between now and 2026, as shown below, suggesting that now is the time for overseas buyers to take advantage of the currency discounts available.
When the sterling dips
Marcus Dixon, director of JLL’s residential research comments: “For overseas buyers looking to purchase a property in their own currency, fluctuations in both exchange rates and house prices can make a significant difference in the amount they pay. At points where sterling exchange rates are weaker buying power in non-sterling currencies increases, creating a window of opportunity.”
Overseas buyers are gradually returning to London. Analysis of Heathrow passenger numbers shows that Middle East visitor numbers have recovered to pre-pandemic levels, with the data showing that the number of passengers from the Middle East was 1% higher in May and 2% higher in June than the pre-pandemic average.
This increase in the return of visitors from the Middle East has led to a flurry of activity across JLL’s New Homes and local Agency offices, with the teams reporting on a release of pent-up demand from Middle Eastern purchasers who haven’t been able to travel for a large amount of time and many of whom, are cash rich and want to diversify their assets.
Strongest performer
JLL expects that the prime central London market will be one of the strongest performers over the next five years, forecasting that by 2026 London house prices will increase by 25.8%, meanwhile in prime central London growth of 22.7% is expected confirming that London is a safe haven for overseas investment.
Alex Carr, director within JLL’s prime central London New Homes team comments: “Although the return of overseas buyers to London has been modest in the last few months with some parts of the world still confronted with Covid regulations, there are now evident signs of demand with overseas buyers recognising an opportunity and seeing value in central London homes. The weaker sterling alongside the safe haven status usually associated with UK real estate is and will continue to drive investment here.
“This return of overseas demand, at present, is particularly apparent amongst purchasers from the Gulf states who are travelling back here for the first time in two years and who see buying in London as a trophy purchase - London has also always historically been a safe haven for wealthy individuals from Gulf states who are looking to diversify their assets, being one of the most resilient and transparent property markets in the world.”
Significant uptick
Thomas Middleditch, head of Kensington sales at JLL adds: “In Kensington, we’ve experienced a significant uptick in enquiries and applications from Middle Eastern buyers, up circa 200% between May and July 2022. It was evident in May that demand was building with increased communications from prospective ME buyers who were preparing for their return to the UK following two years of travel restrictions. A lot of these individuals have kept in touch over the course of the pandemic to stay informed on the market, yet as most are tangible buyers, they have waited until they are in a position to physically return to the UK before enquiring about specific properties.
“In recent weeks, we’ve started to experience their physical return and that pent-up demand that has been building is now being released. There is a noticeable appetite for pied-de-terre property stock, as many have plans to spend more time in the UK and London post covid. As a result, they are looking for properties that offer more space and specifically those that offer expansive lateral internal living space with demand highest amongst penthouses and properties with 3-bedrooms or more. Developments that offer a variety of onsite luxury amenities are also proving popular for the same reason of additional space but also convenience.
“Kensington has always been popular amongst Middle Eastern buyers and considered a low-risk investment given its location and established address. It is also an area that, in parts, is considered to offer value for money, with properties and developments offering a good £ per square foot compared with other affluent areas of London.”
Interest from KSA
Will McKintosh, senior director – head of residential & investment – JLL Mena comments: “Having recently made a senior hire to oversee Residential in Saudi Arabia, David Duke, we are delighted to have also seen a significant increase in the interest from buyers from KSA with a number of investors booking tours of projects and buildings in not only central London but also interestingly enough other postcodes in other parts of London as well.”-- TradeArabia News Service
Share