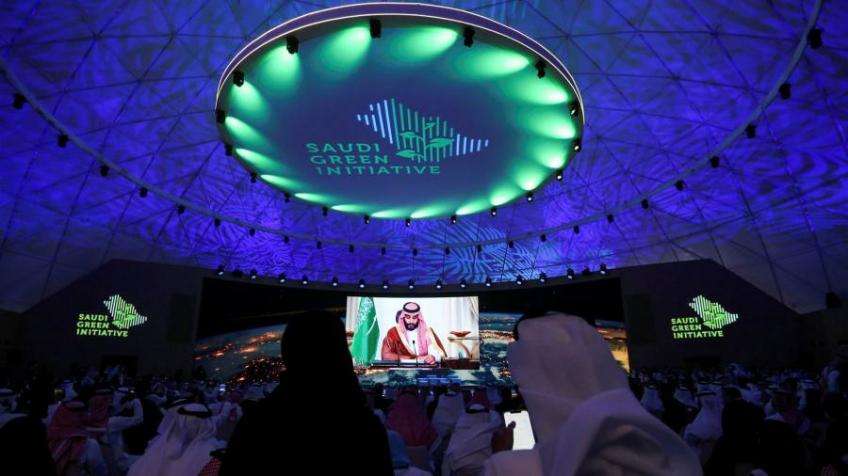 Saudi Arabia has announced a SR700 billion ($186.63 billion) investment in developing a green economy and is spearheading a region-wide initiative to combat climate change and reduce carbon emissions.
The kingdom will plant 450 million trees and rehabilitate 8 million hectares of degraded lands by 2030 as part of the first set of Saudi Green Initiative (SGI) strategies announced by Saudi Arabia’s Crown Prince, Deputy Prime Minister and Supreme Committee for Green Saudi Arabia chairman HRH Prince Mohammed bin Salman bin Abdulaziz Al Saud yesterday (October 23).
Prince Mohammed later unveiled the regional road map to protect the environment under the kingdom's first-ever SGI.
Riyadh will host a wider Middle East Green Initiative starting tomorrow, which, together with the Saudi Green Initiative, will include the plantation of 50 billion trees in the region, the protection of marine and coastal environments and the generation of 50 per cent of Saudi Arabia’s energy from renewable sources.
Leaders from all around the world are expected to take part in the Middle East Green Initiative, including an American delegation led by the US climate envoy John Kerry and Pakistani Prime Minister Imran Khan.
The initiatives come at the heels of Bahrain’s nationwide campaign to plant more than 50,000 trees and shrubs, which will be launched in phases by the National Initiative for Agricultural Development (NIAD).
The campaign, ‘Forever Green’, will be held under the patronage of Her Royal Highness Princess Sabeeka bint Ibrahim Al Khalifa, wife of His Majesty King Hamad and NIAD Consultative Council president.
It aims to support the country’s strategies to sustain the development of the agricultural sector, expand the green area and highlight the aesthetic features of the kingdom.
“The trees and shrubs will be planted in the four governorates on an area covering more than 70,000sqm and more than 21,000 linear metres during the first stage that runs until March 2022,” stated the NIAD yesterday.
Special Envoy for Climate Affairs and Supreme Council for the Environment chief executive Dr Mohammed Bin Daina welcomed the Saudi initiatives which, he said, reflect awareness of the importance of tackling the climate changes and promote urban sustainability.
The two forums will lead up to the UN Climate Change Conference COP26, due to start at the end of the month.
Crown Prince Mohammed bin Salman also noted that Saudi Arabia has already launched initiatives in the energy sector to reduce carbon emissions by 278 million tonnes annually by 2030 – more than double the targeted emissions reduction.
This is in line with the country’s plan to reach Net Zero carbon impact by 2060, while preserving its role in the security and stability of global energy markets.
Saudi Arabia also intends to join the Global Oceans Alliance, the Alliance to Eliminate Plastic Wastes in Oceans and Beaches and the Sports for Climate Action Agreement, in addition to establishing a global centre for sustainable tourism, and a non-profit foundation to explore the seas and oceans.
The move has received global praise. Britain’s Prince Charles, in recorded remarks at the environment event in Saudi Arabia yesterday, said there was a ‘dangerously narrow window’ to accelerate climate change action.
Citing experts, he said the UN Climate Change Conference COP26 must have nationally determined contributions. The Prince of Wales said the Saudi Green Initiative and a wider Middle East Green Initiative, which Riyadh will host, would help ‘accelerate’ the great progress already made.-TradeArabia News Service
Share